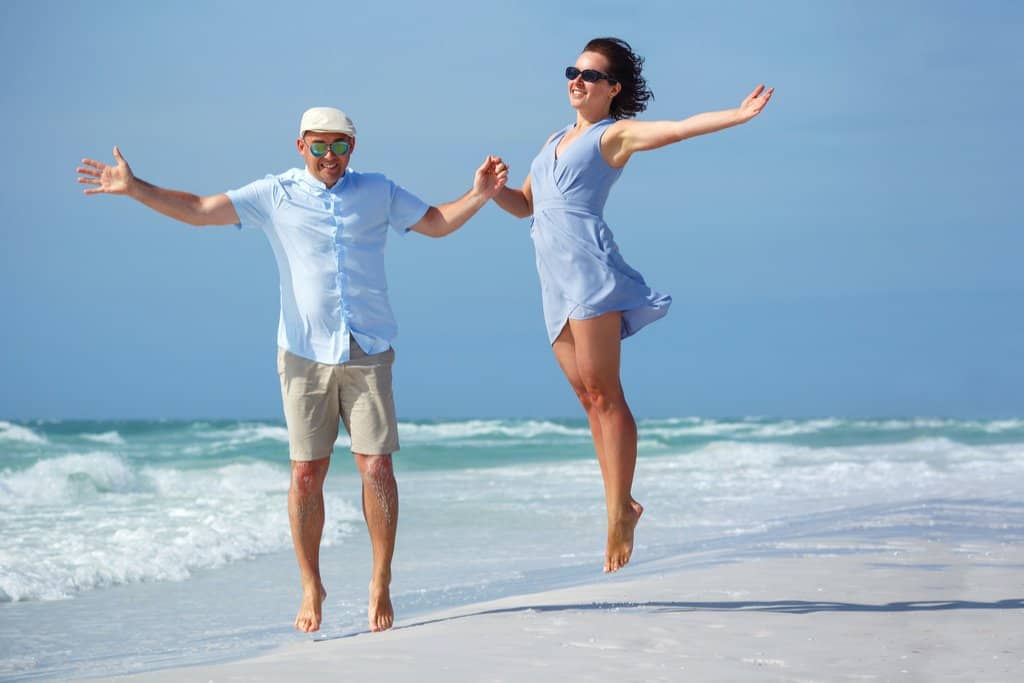 Why does the young woman jump so much higher than the man? Or to ask it as a sporting question: What does a man have to change to jump higher? Let’s assume that both have the same muscle strength in relation to their body weight and have made the same effort!

The distinction between right-handers and left-handers is quite common for us. It is merely the preference of our brain from which side we prefer to move. I.e. we organize ourselves around this one dominant side. As right-handers we also comb our left half of the head with the right hand and do not change the comb into the left hand.

Accordingly, there is an organization of the body between above and below, between people with ground orientation and spatial orientation. While the distinction between left-handed and right-handed works like a mirror of the other side, the preference for floor or space is much more far-reaching.

Back to the picture of the young couple, do you see the orientation? He’s ground oriented, while she’s space oriented. The young man leaves his comfort zone – the floor – his gaze stays down. He raises his arms only conditionally, his entire front stretches. Quite differently the young woman, who broadly opens herself up into the room and can organize her entire body behind this opening upwards.

Conclusion: The efficiency of the bounce does not depend on sheer muscle power, but on the orientation of the entire body in motion.

Look at the posture of the reading man. Do you see how his entire posture is changing?

As long as the man reads, the attitude is amazingly upright. It shifts however with the brisk going to the back. I.e. depending on the orientation – reading downwards // quickly moving forward – this gentleman organizes himself quite differently around his line of gravity (vertical center line). Posture is therefore not something static, which is adjusted due to our tissue tension, but is also determined by our orientation in space.

We have an orientation in space or on the floor as our preference, to which we mostly remain faithful. And yet, in principle, none of these preferences is any better. It’s like breakfast, we prefer either tea or coffee and all the time, no matter which country we visit. If we make an effort, we can also try tea as a coffee drinker in England. So the young man would have to learn how to change his orientation before the jump. That’s the only way he’d be able to jump higher.

Related Information for Orientation and Efficiency